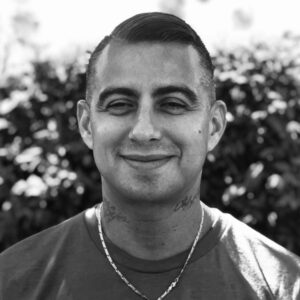 In 1994, a 14-year-old victim was shot during an altercation between a group of people at a gas station. Arturo Jimenez, who has always maintained that he was nearby when he heard the shots, drove his blue Blazer to see if anyone needed help, and when he got to the gas station, people jumped in his car through the open back window and told him to leave. He saw a young woman on the ground cradling the victim and called out to her to take him to the hospital as he drove away. That woman turned out to be the victim’s friend who was standing right next to him when he was shot. She told police that the driver of the Blazer was not the shooter, that he had called out to her, and that he may never have gotten out of the Blazer. These statements were memorialized in handwritten notes by the detective. The detectives also typed formal police reports, which included the fact that a police officer saw Jimenez driving away from the scene and told the detectives that he had recognized the driver of the Blazer as Arturo Jimenez, but did not include the statement from the crucial eyewitness that the driver of the Blazer was not the shooter.

Jimenez’s parents, who never doubted their son’s innocence, took out a second mortgage on their home to pay for his defense. Unfortunately, his trial attorney, who has since been disbarred, failed to present the jury with any of the exonerating information that was in the police reports and failed to do the investigation that has revealed further evidence of Jimenez’s innocence.

Due to the trial attorney’s incompetence, the jury never heard that the eyewitness with the best vantage point told the detectives that the driver of the Blazer – who an officer identified as Jimenez – was not the shooter. They also did not hear that none of the other eyewitnesses positively identified Jimenez as the shooter. In fact, one eyewitness listed several ways in which the real shooter looked different from the picture of Jimenez.

Arturo Jimenez was just 18 years old when he was convicted of murder. His conviction was based on single eyewitness identification by a young woman in the backseat of a car who saw the shooter for only a moment. Through the investigative work of pro bono attorney Ellen Eggers, this single witness revealed that her identification was the product of police pressure. In addition, the real shooter, who is now deceased, confessed to multiple people that he had committed the very murder that convicted and wrongfully incarcerated Jimenez for 25 years.

Jimenez was released on parole into Shelter in Place on April 10, 2020, after demonstrating that his release would not pose a danger to the public. The Northern California Innocence Project, Morrison and Foerster, and attorney Ellen Eggers teamed up to present Jimenez’s case to the Los Angeles County Superior Court and the Los Angeles County District Attorney’s office, who agreed that Jimenez’s trial attorney was ineffective for failing to present the evidence of Jimenez’s innocence. On August 12, 2020, the court reversed Jimenez’s conviction and the Los Angeles County District Attorney’s office announced it was dismissing the case. On February 2, 2021, the Superior Court of California, County of Los Angeles found Mr. Jimenez factually innocent.