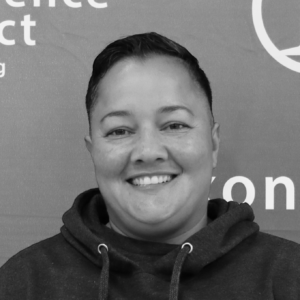 Karla Baday met her former partner, Maria Medina, in 1999. Baday and Medina lived together in Medina’s home in Armona, CA with Medina’s four young children. Throughout their relationship, Baday cared for the children as a primary caregiver, while keeping a regular job and paying household bills.

Medina and Baday had an explosive relationship and sometimes got into physical fights, often as a result of Medina’s frequent use of methamphetamines. Their romantic relationship ended in 2001 after a physical confrontation, and Baday moved out of Medina’s home and went to live with her mother in Los Angeles.

In January 2002, Medina invited Baday back to Armona to celebrate Medina’s birthday. Baday accepted the invitation and for the next week, she stayed with Medina and her children in their home without incident. The children were happy to have her there, but were sad when Baday announced on February 8, 2002 that she was returning to Los Angeles.

That same day, when Baday arrived in Los Angeles, Medina called and accused her of molesting the children during a two-hour trip Medina took to the grocery store when Baday was visiting. Medina claimed her children said that on February 2, 2002, while Medina was at the store with her sister, mother, and oldest son, Baday had touched the other three children inappropriately.

Baday denied all of the allegations. Medina then called Child Protective Services who told her to call the police. Later that same day, the three children were interviewed by detectives. The following day on February 9, 2002, the three children who were allegedly assaulted, were brought in for a medical examination at the detective’s request.

When the children got to the Hanford Community Medical Center, they were agitated and refused to take their clothes off for an examination. They stayed for approximately thirty minutes to an hour while Nurse Georgeanne Greene attempted to interview and examine them. Nurse Greene was able to interview two of the children but was unable to interview the other. Because the children were too agitated, no medical exams were conducted.

On March 7, 2002, nearly a month after the first attempt at an exam, Medina took the children back to the Medical Center. This time, the children were calmer and less agitated and Nurse Greene examined the children. She concluded that the “injuries” on the children were consistent with the allegations. On May 3, 2002, the King’s County District Attorney charged Baday with multiple counts of child sexual abuse.

At trial, Baday’s appointed defense counsel failed to challenge the testimony of the state’s expert witness, Nurse Greene, who maintained that the medical evidence proved that the allegations were true. This testimony was patently false, yet left unchallenged, which served to bolster the prosecution’s otherwise weak case. Baday was convicted and sentenced to 45 years to life.

Baday always proclaimed her innocence and first wrote to NCIP in 2008. In the course of reinvestigating Baday’s case, NCIP consulted with Dr. Crawford-Jakubiak, Medical Director of the Center for Child Protection at UCSF Benioff Children’s Hospital Oakland. Dr. Crawford-Jakubiak reviewed the medical reports along with the photographs and videotapes taken during the examinations of the children.  Dr. Crawford-Jakubiak opined that Baday’s conviction rested upon incorrect conclusions and verifiably false medical testimony.

NCIP also consulted with Luis Rosell, a licensed psychologist with experience in evaluating and treating sexual offenders. Rosell interviewed Baday and administered a psychological examination. Rosell concluded that Baday exhibited no personality disorder, no sexual aberrant behavior, no antisocial behavior, and no impulsive behavior. Rosell concluded that the Baday “demonstrated a nondisposition to commit the crime for which she was convicted.”

On October 20, 2017, NCIP and Duane Morris filed a petition for writ of Habeas Corpus on Baday’s behalf. The petition demonstrated false evidence was used to convict Baday, including Nurse Greene’s testimony. In addition, Baday’s trial counsel was ineffective, failing to question or rebut the medical evidence produced at trial.

On March 19, 2019, the District Attorney conceded that the medical evidence presented at trial was false and stipulated that Baday’s conviction should be reversed. The District Attorney initially claimed that he intended to retry Baday for the original crimes, but upon realizing the weakness of his case, agreed to a plea bargain with Baday wherein the 2002 sexual molestation charges would be dismissed.

On April 23, 2019, Baday was released from prison after serving almost 17 years for a crime that she did not commit.