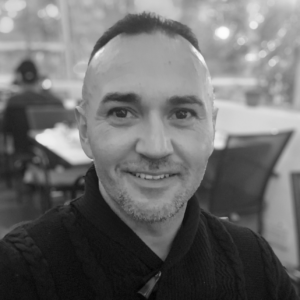 On April 2, 2002, Raymond Rodriguez was gunned down in a drive-by shooting in front of his younger brother, Eric Millan, in San Jose, CA. The two had been standing in the yard of their neighbor, David Gonzalez.

An SUV drove down the street, then did a U-turn and made another pass. The SUV stopped in front of Rodriguez, who approached the vehicle. At first, Rodriguez thought a friend was driving, but then the driver fired a single shot, hitting Rodriguez, and driving away. A few hours later, the vehicle was found burned a few blocks away.

Rodriguez was taken to the hospital for his injuries that would leave him paralyzed and in a wheelchair. In Rodriguez’s first interview with police, he said that he did not recognize the shooter and had never seen him before. The general description given by Rodriguez, Gonzalez and Millan, who had the best view of the shooting, was not very detailed. They said the shooter was a Hispanic male, around 17-24 years old, with short hair, a thin build, medium to light complexion, a small amount of facial hair, maybe a thin mustache or goatee, and wearing either a blue or white T-shirt or a gray sweatshirt.

A few days later, 23-year-old Lionel Rubalcava was driving his truck through the same neighborhood. He saw Jennifer Rodriguez, the victim’s sister, outside and although he didn’t know her, he pulled over to flirt with her. While they were talking, she told Rubalcava about the shooting, then quickly yelled out, “Call the cops.” Rubalcava told her he had nothing to do with the shooting and drove off. Rodriguez would testify that the police had told her to call if anything strange happened in the aftermath of her brother’s shooting.

Gonzalez was also standing outside at the time. When police arrived, he told them that the driver of the truck might also have been the driver of the SUV from the shooting. He showed police where the truck usually parked in the neighborhood, and the following day added that he had learned from a friend that the truck was Rubalcava’s.

Rubalcava’s mugshot was included in a photo array which was shown to Gonzalez, Jennifer Rodriguez, Raymond Rodriguez and Millan. Rubalcava’s photo stood out because he had a different background than the fillers and he was the only person in the array who resembled the description of the shooter. Each of them selected Rubalcava, and he was arrested the next day and charged with attempted murder.

Rubalcava had an alibi. He said that at the time of the shooting, he was driving to Hollister, a town 50 miles south of San Jose, for a date. His date had insisted he leave at 5pm, because of the traffic, and he had spent most of the day getting ready for his date. Rubalcava gave the police his date’s cell phone and pager numbers, and she confirmed that she had a date with Rubalcava.

At the three day trial, Rubalcava provided his alibi evidence and testified to his innocence but the victim and his brother pointed to Rubalcava as the shooter. Gonzalez recanted his identification prior to trial and said that when he saw Rubalcava in person at a pretrial hearing, he realized he wasn’t the shooter. The jury, which deliberated for longer than the trial lasted, found Rubalcava guilty of attempted murder. He was sentenced to 31 years to life in prison based solely on the two eyewitness identifications.

Rubalcava’s appeals were unsuccessful, even though the victim had recanted his testimony in 2005. Rodriguez said he had always told police he was unsure about his identification, and that he had simply said Rubalcava looked like the person who shot him. The officers, however, had assured him there was other evidence that bolstered the identification. As a result, Rodriguez said, he had testified falsely as to his certainty that Rubalcava was the shooter.

In 2009, Rubalcava contacted NCIP for assistance with his case. NCIP teamed up with investigators Dre McEwen and Grant Fine, and pro bono partners at Simpson Thacher to investigate Rubalcava’s case. The team put together information showing the eyewitness identifications were unreliable and Rubalcava should have never been convicted.

NCIP presented the case to the Conviction Integrity Unit in the Santa Clara County’s District Attorney’s office. The Assistant District Attorneys David Angel and Stacey Capps immediately saw the need to investigate the case further. Among the new information, the DA’s office found was the stunning admission by the victim who had worked hard to overcome what he had been through that he had never been completely sure about his identification. He told them that he had only seen a tiny portion of the shooter’s face– and only for a brief moment before he was shot.

Rubalcava’s ability to get his conviction reversed hinged on the passage of a new law that NCIP helped get passed on September 30, 2016. That law, Senate Bill 1134 authored by Senators Leno and Anderson, loosened laws that had previously made it virtually impossible for wrongfully convicted people to get a new trial based on new evidence. Instead of the new evidence needing to “point unerringly to innocence”, the new law requires only that —had the new evidence been available at the original trial— there would “more likely than not” have been a different outcome. As the District Attorney’s Office noted when it joined NCIP in asking the court to reverse Rubalcava’s conviction, “The foundation of our democracy and criminal justice system is the presumption of innocence.”